Just a brief note to update the news from the garden 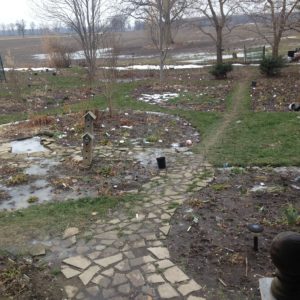 Moving into the new year the cold air hit and bitter winds blew for a number of weeks but little to no snow collected here this winter. Today February 20th was about 14 degrees celcius and there is no snow outside at all. I spent yesterday and today cleaning out gardens. I know we will see more cold weather but being able to clean a few gardens in advance of the actual spring weather is a real advantage. Daffodils are starting to show as are the crocus so real spring cant be too far away. I am looking forward to seeing some sun and some green . It has been a long grey winter here. Come on spring ! I am waiting for you .

Thought I would write a brief note to update this page.  It is no longer spring , far from it .   You would think that any daylily worth its salt wouldn’t be caught dead showing itself in this kind of weather . Well you would be right to a degree. Right now we are in a deep deep freeze in South Western Ontario

The snow  from early January in the image above  has melted and all we have left are one foot drifts in certain spots.  The daylilies have given up and died back to the ground , even those designated as Semi-evergreen or Evergreen . The plants were still green above ground all thru the months of November and December and even into early January but now that sub arctic winds and cold have arrived they have decided that discretion is the better part of valor and have tossed their leaves and retreated underground.  Can’t say as I  blame them . If I didn’t have to go out I wouldn’t either .

Still days are getting longer and soon (hopefully) the gardens will start to appear as in the image I posted last April .  Hurry up Mother Nature , I am waiting with bated breath to get back out to the gardens.  Won’tcha  at least consider speeding things up just a tad? 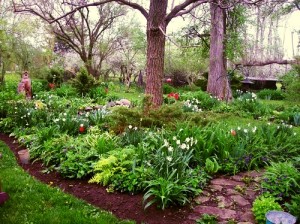 Well spring is well underway. The snowdrops and crocus and mini iris are blooming .The daffs are putting up their bloom stalks so it won’t be long before they will be nodding their yellow and white heads in the wind. Lungwort is starting to bloom and tulips and violets will join them shortly and before you know it the poppies will join in.  Although I enjoy all the spring blossoms and the colors , I do my best to wait patiently every year for daylily season .

This site uses Akismet to reduce spam. Learn how your comment data is processed.